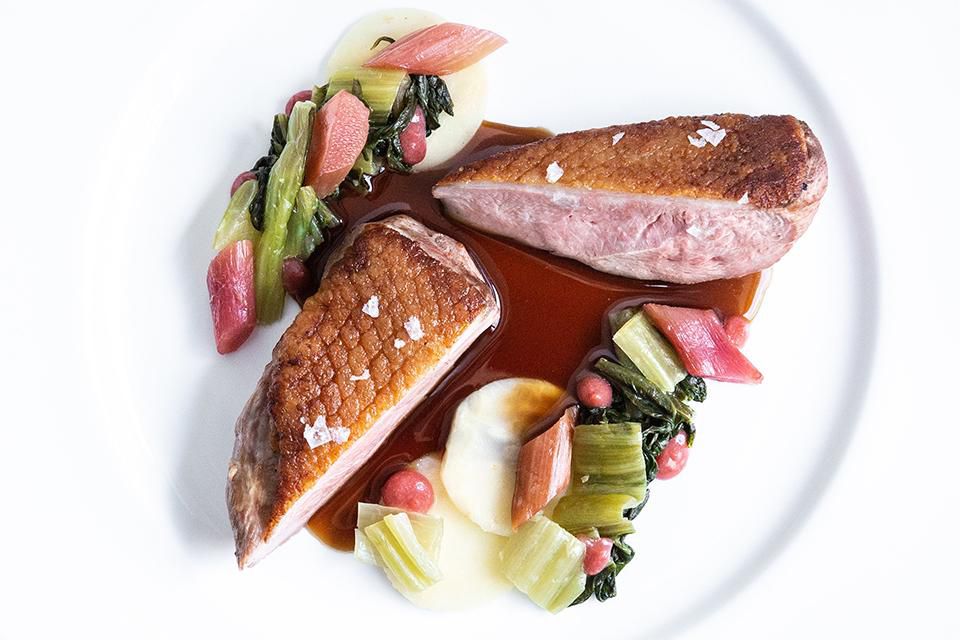 Victoria’s food scene gets eclipsed by nearby Vancouver, but British Columbia’s capital has long earned its culinary cred: it was home to Canada’s first brewpub; it has a neighboring wine region; it serves one of the best high teas in the country; it boasts the nation’s oldest Chinatown; and Canada’s first chocolatier started here.

Dig in to find out why you should taste your way through the Pacific Northwest’s oldest city. 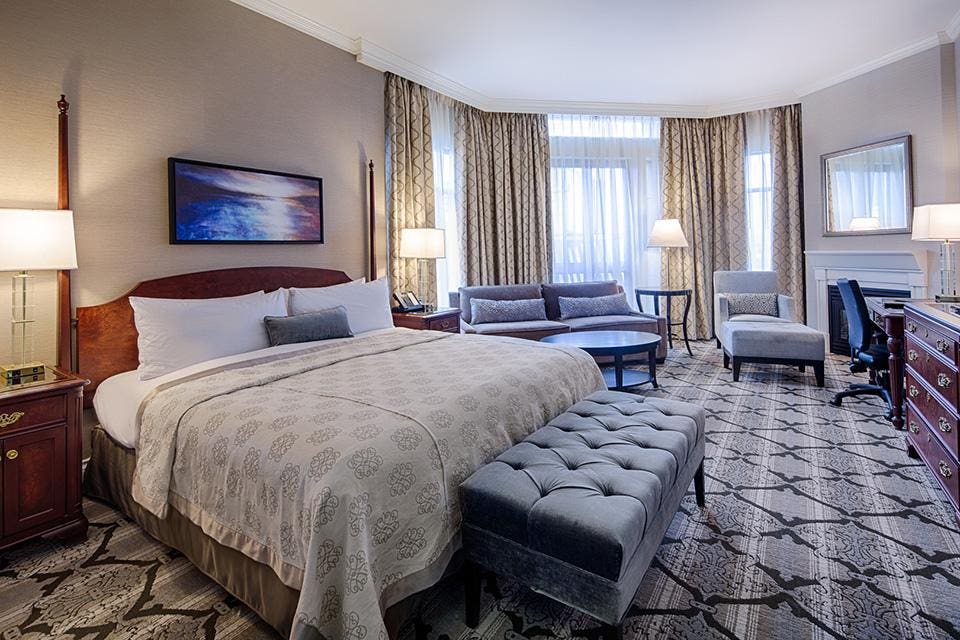 For our Victoria culinary tour, we checked into The Magnolia Hotel & Spa, and not just because the Forbes Travel Guide Four-Star hotel has an excellent location mere blocks from the Inner Harbour or because of its plush, sophisticated accommodations.

The 64-room boutique hotel offers fun self-guided itineraries for guests called Curated Trails, a number of which revolve around food and drink. Here are highlights from Magnolia’s Culinary Trailblazers, Craft Brewery and Tea-riffic Trails tours, plus some other delicious spots we found along the way. 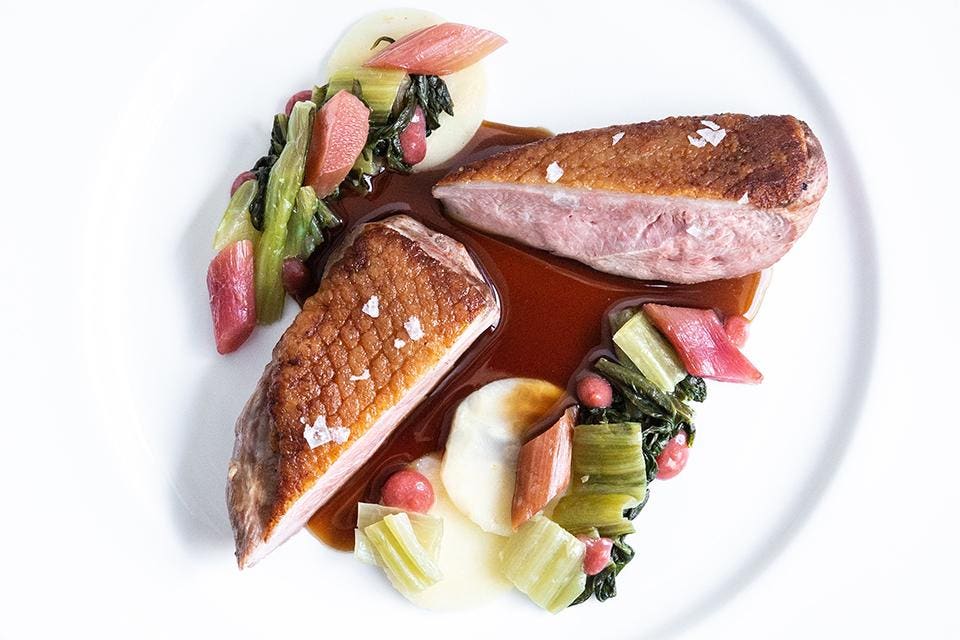 Duck at The Courtney RoomLEILA KWOK

The first stop is at the hotel’s chic brand-new restaurant that debuted in April. Come for fine dining or to soak up the sun on the new patio, which gives a glimpse of the domed capitol building, one of Victoria’s most-recognized sights. Then linger into the wee hours at the white marble bar for Midnight in Oaxaca cocktails (Los Siete Misterios Doba-Yej mezcal, lime, habanero bitters, mint, cucumber) and the irresistible potatoes Courtney (duck fat tater tots accompanied by onion dip).

Add on the caviar service. The sustainable, organic Northern Divine pearls, chives and creamy “dip” (garlic, garlic and onion powder, crème fraîche, egg yolk, grapeseed and olive oils, lemon juice) on top of a housemade chip was one of the best bites on the menu. And opt for the vino pairings — you’ll get a nice sampling of the local Cowichan wine region. 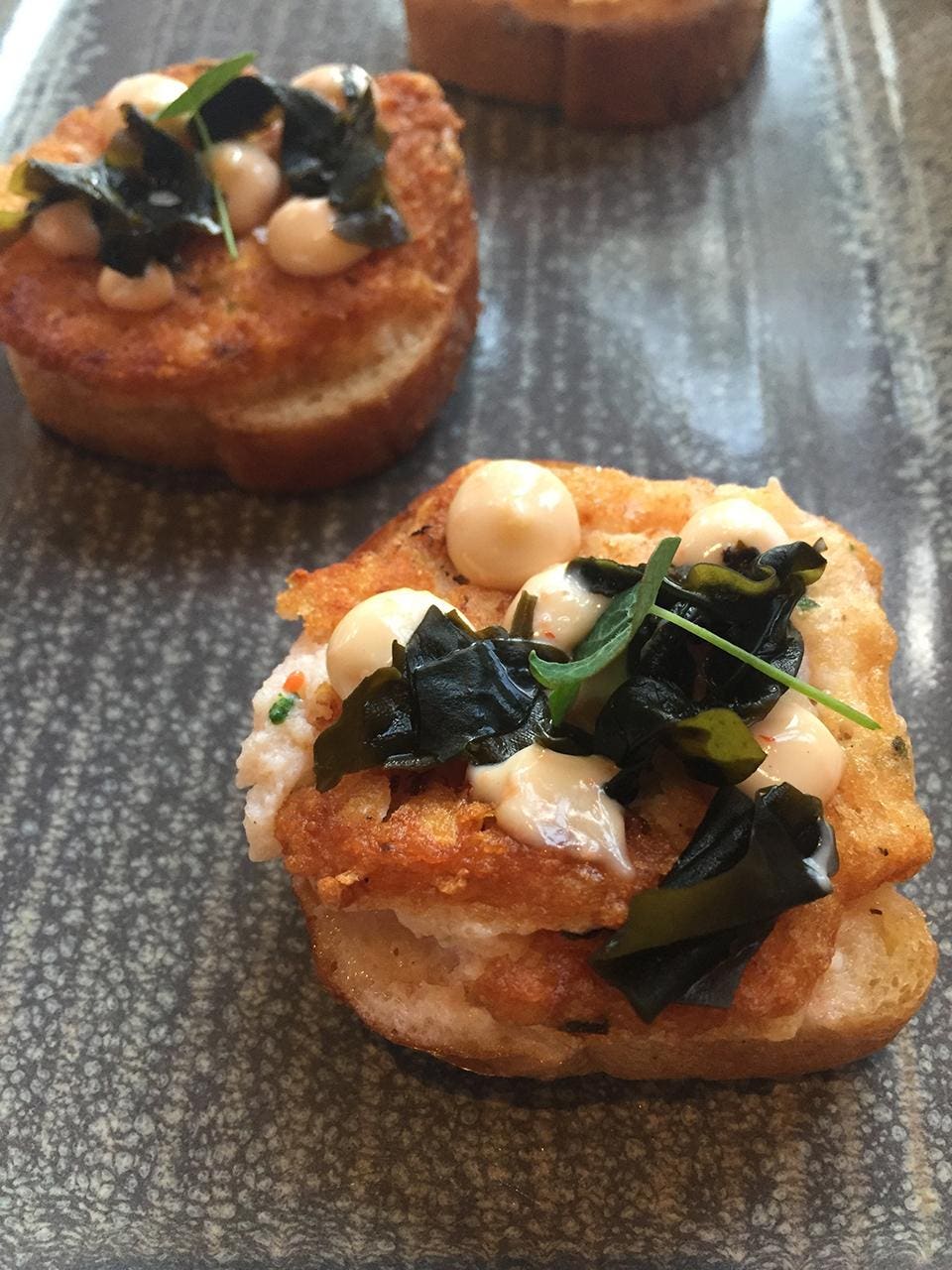 A Sampling from OloJENNIFER KESTER

The cozy space basks in a warm glow from its orange-yellow walls and birds-nest-like lighting fixtures. The food goes for an artful presentation, but it’s just as homey as the environs.

The addictive deep-fried semolina cubes with garlic mayo will have you requesting a second round. The vegetable platter gets an upgrade with a deeply smoky white bean hummus. For a seafood-heavy dish that won’t weigh you down, choose the sablefish collar with clams, potato, kale, daikon and shellfish butter. 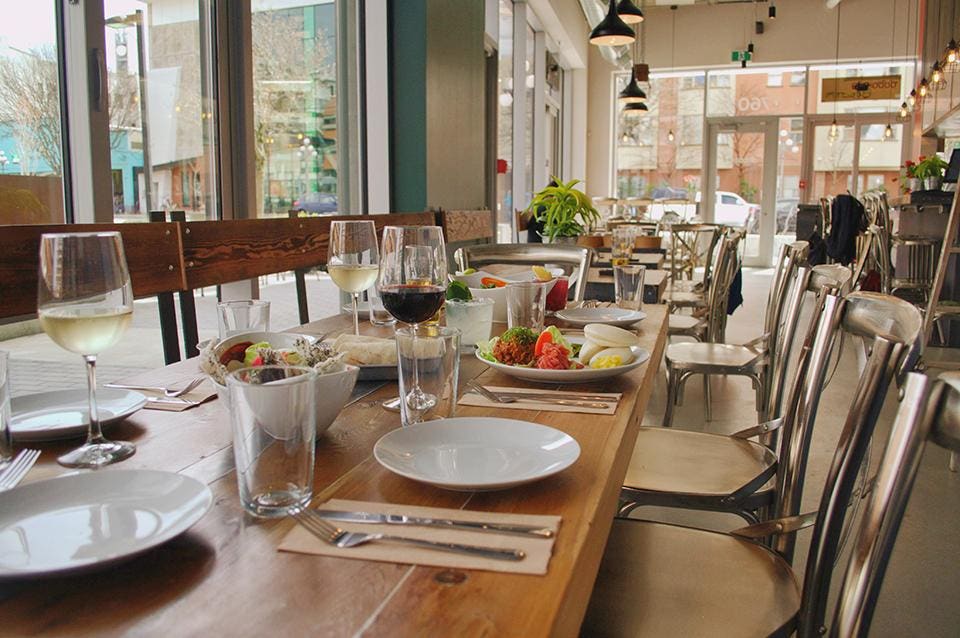 Chef Kunal Ghose firmly established himself in Victoria’s food scene with popular restaurants like Red Fish Blue Fish and Fishhook. For his April-opened venture, he embraced Dobosala’s location fronting Pandora Avenue’s new bike lane and went with a fast-casual concept that has the only ride-through window in the city.

But it’s worth parking your two-wheeler and taking a seat inside the industrial eatery to savor Ghose’s bright, flavorful Indo-Pacific fusion. Try the crispy pakora with kimchi crema and tamari-tamarind ponzu; “squimp” onigiri — rice balls with Humboldt squid, Tofino shrimp, sockeye belly sashimi and horseradish mayo; and the adobo-gochujang chicken stuffed in a tortilla cone. Wash it down with a housemade mango-hibiscus iced tea. 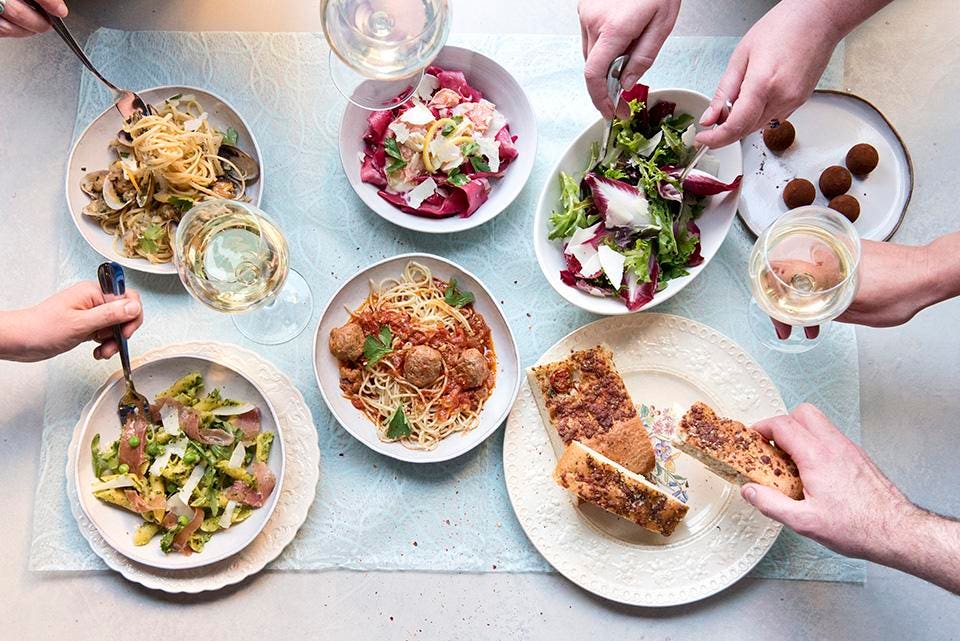 Victoria Public Market at the Hudson

At the small public market, save your appetite for La Pasta, which debuted in May. The spot churns out handmade pasta daily. Order the comforting carbonara with toothsome spaghetti and porchetta bits or the fusilli pesto topped with generous dollops of fresh ricotta. But first begin with antipasti like fried artichokes with lemon aioli for some brightness as well as the rich arancini.

Or venture over to Very Good Butchers. The first vegan butchery on Canada’s west coast, it specializes in plant-based “meat.” Try a dish featuring the smoky seitan bacon or the “pepperoni,” which gives more of a kick than its beef-and-pork counterpart. 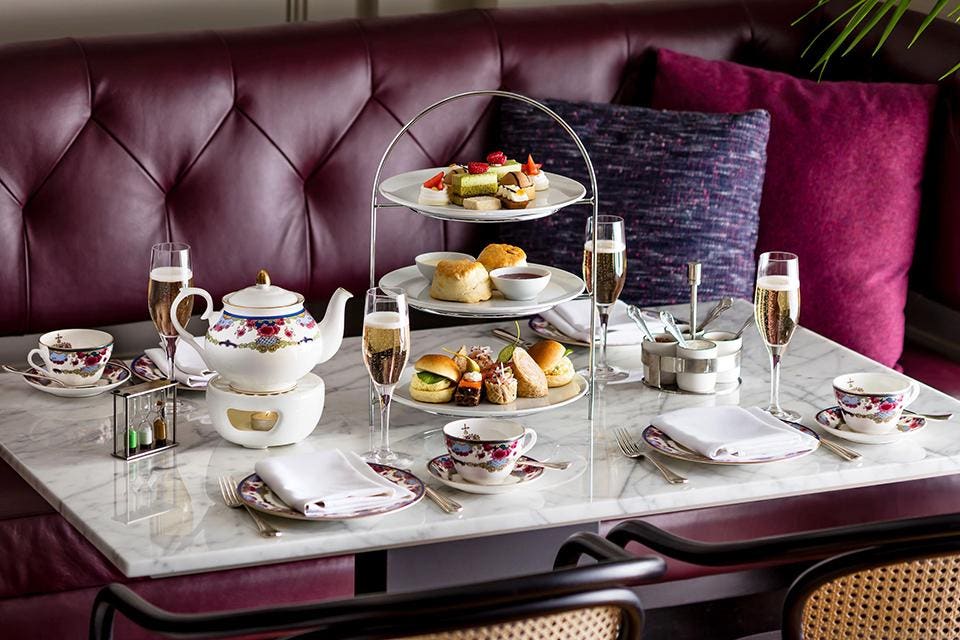 Half a million cups of tea are poured annually at the Forbes Travel Guide Four-Star hotel, whose afternoon ritual has been a Victoria tradition since 1908. Don’t let the date fool you: the modern room overlooking the harbor makes for one of Canada’s best tea experiences.

Thoughtful details abound: the china bears the same timeless purple-and-pink pattern that King George VI and Queen Elizabeth chose for a 1939 dinner party they hosted at the hotel; the menu arrives in an elegant wooden box that also holds samples of each high-quality blend; the housemade strawberry jam uses local berries, honey from the hotel’s beehives and lavender from its rooftop garden; and servers are warm, welcoming and ready with just the right recommendations.

Even if you’re not one for tea, come for the Empress 1908 gin. The hotel’s small-batch, butterfly-pea-blossom-infused pour possesses an indigo hue that turns lavender when you add citrus or tonic. The color-changing G&T is a must for your Instagram feed, but also for its great taste, with juniper and grapefruit notes. 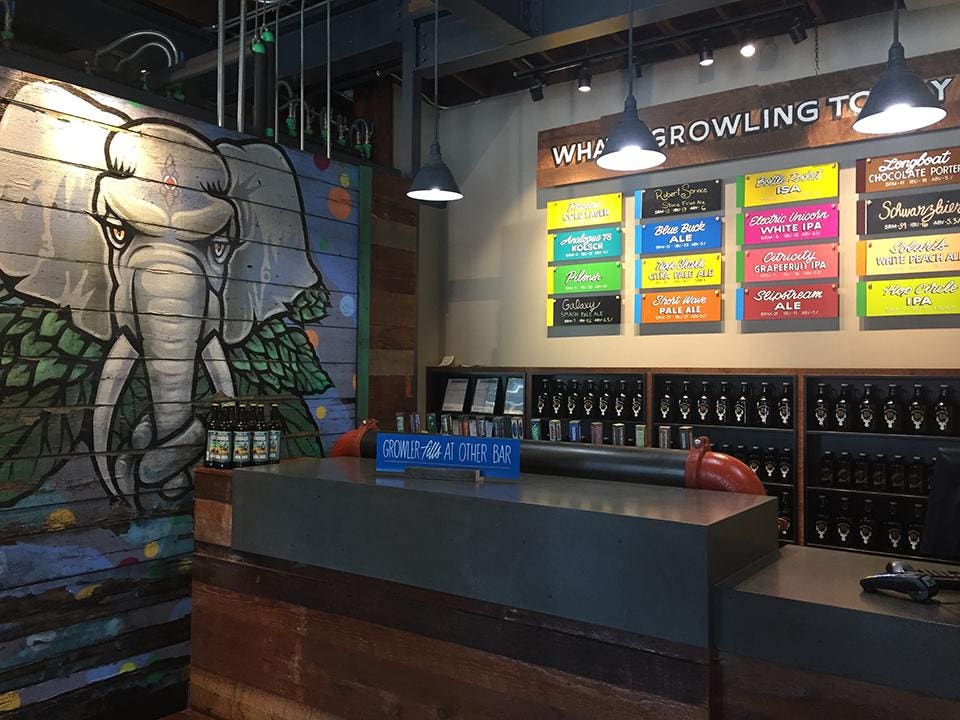 The brewery launched in 2001, but it added the city’s first tasting room in April. Head there to sample the easy-to-drink Blue Buck or Robert Service Stone Fired Ale.

But everyone will find something to sip here. Check out the all-natural house sodas — i.e., made without syrups or other artificial sweeteners — like the effervescent, Creamsicle-like Dare Devil orange.

Seek out a small neon elephant above the Pacific Transfer Building sign, enter and go to the end of the hallway for this restaurant/bar. The brick-walled, pressed-copper ceiling space is an inviting local favorite for well-crafted cocktails. 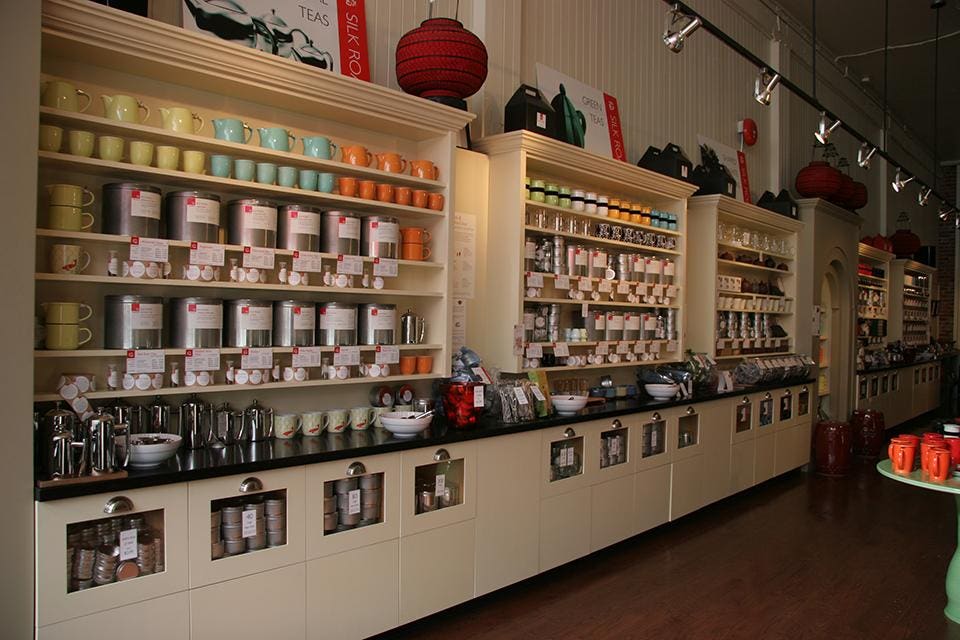 In this tea-loving city, there’s no better souvenir than local leaves. Tea master Daniela Cubelic makes exquisite blends at her Chinatown shop. You’ll notice that Silk Road teas appear all over the city (including Little Jumbo, The Courtney Room and rooms at the Magnolia). 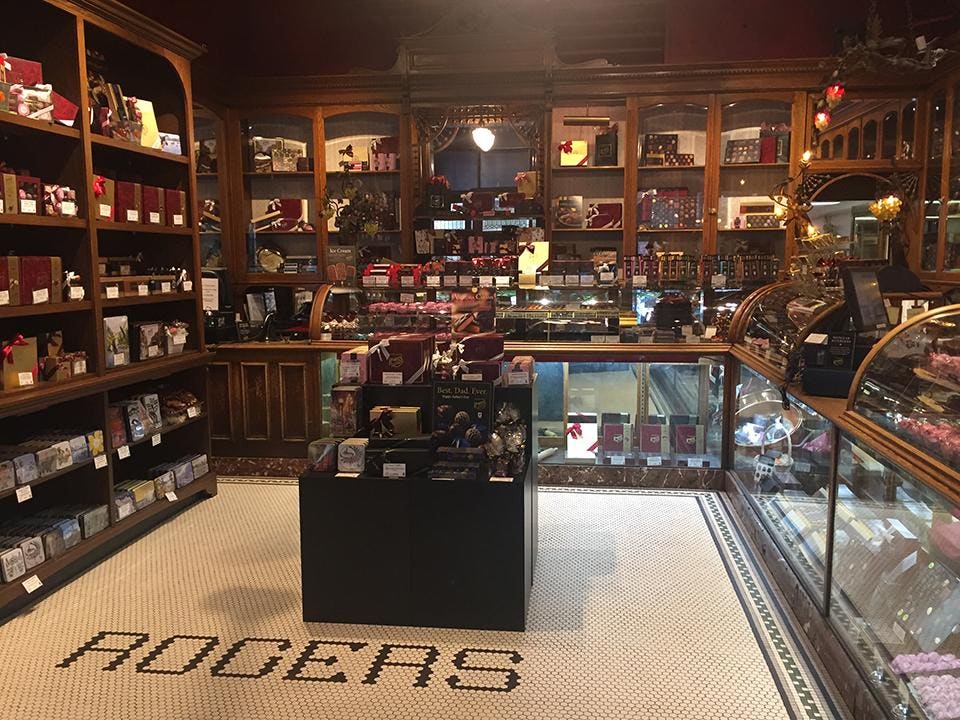 While you can purchase Rogers’ chocolates all over Canada, Charles “Candy” Rogers started his business in Victoria in 1885. His first confection, the Victoria Cream, launched his career as the country’s first chocolatier.

Pop into the original Government Street shop, which seems frozen in time. Staff dressed in starched white button-down shirts and black ties stand ready to sate your craving from the wood shelves and glass cases filled with chocolates. The must-buy sweet is Rogers’ Victoria Cream, wrapped in a waxy pink-gingham paper. Enrobed in dark chocolate, the discs are made with fresh cream and fruits and don’t contain any additives. Our favorite was the not-overly-sweet, nut-studded hazelnut.

Jennifer Kester is Forbes Travel Guide‘s Executive Editor. Her finger is on the pulse of the latest in luxury travel, spanning hotels, food, culture, top destinations and more.